We are getting more and more excited as the days pass by. 2021 is just around the corner. It will be a year like no other, because it is a Holy Year or Jubilee Year.

There is a Holy Year every 6, 5, 6 and 11 years because it is celebrated when the Feast of the Apostle St. James falls on a Sunday.

On this day, the Holy Door of the Santiago de Compostela Cathedral opens for everyone. Entering the Cathedral of Santiago after travelling the Camino is always magical and special for pilgrims. But being able to cross through the Holy Door is an experience that will last in your heart forever.

We’ve compiled this article with everything you need to know about the Holy Door and the Jubilee Year.

A Holy Door is a special entrance in a Catholic church or basilica which is opened only during a Holy Year, or Jubilee Year. Any believer who walks through the Holy Door during this special year is granted plenary indulgence: forgiveness for all their sins. Walking through the Holy Door of Santiago, the pilgrim arrives almost immediately at the main altar. Here, they will find the tomb of Santiago, and can perform the popular pilgrim ritual of embracing the Apostle. It is located in the chancel which faces Plaza Quintana.

2 – What does the name Holy Door mean?

The term Holy Door comes from the words of Jesus from the Gospel according to St John: “I am the door, he who enters through me shall be saved”. Walking through the Holy Door of the church means an attitude of welcoming, of gratitude, of asking for forgiveness, of giving thanks and of knowing for sure that we will be blessed

3 – How many Holy Doors are there in the world?

In Rome, there are four papal basilicas that have a Holy Door:

As well as the papal basilicas, there more Holy Doors in four other countries around the world

There are three in Spain

In France: The Basilica of Ars.

In Canada: The Cathedral-Basilica of Notre-Dame de Quebec.

In the Central African Republic: Notre-Dame of Bangui Cathedral

The Holy Door is linked to the Jubilee of an important event within Catholic Tradition. It’s a “year of thanksgiving”, in which believers focus on internal renewal. It’s a year of forgiveness of sins, and for atoning for sins; a year of reconciliation between adversaries, a year of mass conversions, and a year for the Sacrament of Penance. In order to be granted plenary indulgence, believers must go to confession, receive communion and pray the Creed, and also pray for the Pope and his intentions. Having done all this, their sins will be forgiven and they will be able to go straight to heaven without passing through purgatory.

5 – What is the origin of the Jubilee Year?

The tradition of the Jubilee Year has its origins in Judaism, and the Hebrew word Yobel which refers to the sheep’s horn which was blown to announce the start of a special year dedicated to God. In Santiago de Compostela, the first Jubilee or Jacobean year was declared by Pope Calixtus II, and was celebrated in 1126. This made Santiago de Compostela the second Jubilee city in the world, after Rome.

6 – How often are Jubilee Years celebrated?

In theory, the Holy Door of Santiago only opens during Jacobean Holy Years, or years when the feast day of the Apostle Santiago (July 25th) falls on a Sunday, something which occurs every five, seven or eleven years. The next Holy Year will take place in 2021, and the last one was in 2010.

7 – What is plenary indulgence?

It’s a concession granted by the Catholic church which consists of the total forgiveness of all sins. This concession is obtained in Santiago by making a pilgrimage to the Apostle’s tomb, saying a prayer in the cathedral and going to confession and receiving communion (the pilgrim has a window of 15 days after visiting the cathedral to perform these two sacraments). Plenary indulgences have existed in Santiago since the 12th century, and from the 15th century onwards they began to be associated with the Holy Years or Jubilee years.

8 – What is the origin of plenary indulgences, and who created them?

The first documented indulgences were granted in Compostela by the Pope in the 12th century. With the creation of Holy Years or Jubilee Years in the 15th century, plenary indulgences began to be granted by the Compostela chapter to pilgrims who visited the Apostle’s tomb. It’s unknown exactly who created them, but the first documented plenary indulgence was granted in the year 1063 by Pope Alexander II to all foreigners who came to Spain to fight against the Moors.

9 – How is the act of Pilgrimage related to the Holy Door?

The act of crossing through the Holy Door is a rite of passage into a new life. This rite is one of the basic concepts of all pilgrimages. It’s related to the words of Jesus, in the Gospel according to St John (10:9) “I am the door; he who enters through me shall be saved” and also in the Book of Revelation (3:8) “Look, I have placed before you an open door which no one can close”. The Holy Door of Santiago was built in the 16th century to symbolise this rite of passage after the creation of the same ritual in Rome by the Spanish Borgia Pope Alexander VI. 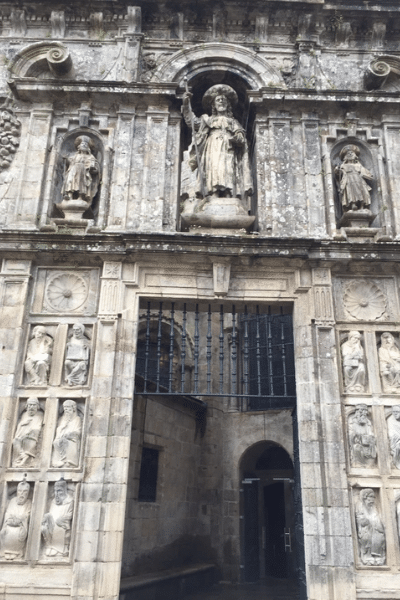 Any believer of any faith can walk through the Holy Door of Santiago Cathedral. This rite of passage is common to the faithful of all religions, as a symbol of closeness to God and of sacrifice to show repentance for sins. Moreover, the love of Christ is not just for Christians, and the Camino is a place of brotherhood for the different faiths that exist in our world.

11 – What does the Holy Door of Santiago Cathedral look like?

The Holy Door of Santiago cathedral is a small entrance, which opens into the rear section of the cathedral to give almost direct access to the tomb of the Apostle and thus facilitate the rite of embracing his statue and visiting his tomb. Nowadays, access to the Holy Door is through another, grander entrance which forms part of the 17th century Baroque facade which faces Plaza de la Quintana. Huge queues form in Holy Years, but if you get up early (the door opens at 7am) you will hardly need to wait at all to enter through it and reach the tomb of Santiago.

12 – What happens during the Holy Door’s opening and closing ceremonies, and when do they start?

The opening ritual of the Holy Door of Santiago takes place in the evening of December 31st, on the eve of the Holy Year. A great gathering of clerics, pilgrims and believers, led by the Archbishop of Santiago forms in Plaza de la Quintana. The Archbishop hits the wall of stones which seals the door with a silver hammer, and the stones fall, symbolising the opening of the HolyYear. The perimeter of the door is purified with holy water and olive branches, and the Archbishop is the first to walk through it. A similar ritual takes place the following December 31st to mark the closing of the gate.