The Camino de Santiago is considered the most important Catholic pilgrimage in the world. Every year, thousands of people make a part of the way, or the whole way, to visit the tomb attributed to the apostle Santiago (St. James).

The Way of Saint James is an experience for life that allows pilgrims to find spiritual peace and live in contact with nature.

It is also considered a social space where many pilgrims meet each other every day, a tourist space where many people get to know beautiful places in our country and a cultural space where people can observe some of the great creations that men have carried out throughout the territory through which the multiple Jacobean Routes run.

Of the many routes and stretches that run through the Iberian Peninsula, the French Way is the best known and most travelled by pilgrims, so our amazing Marly Camino guides have compiled a list of the 17 most emblematic monuments that are worth seeing and visiting in case you decide to embark on this adventure.

Sit back, take note and enjoy the blog!

Attached to the cloister is the Royal Pantheon (13th century), where the remains of King Sancho and his wife Clemencia de Tolosa rest. Also we recommend to see the museum of the Collegiate Church, the chapel of Santiago (13th century) and the chapel of the Holy Spirit (12th century), the oldest building in Roncesvalles.

The bridge “La Reina” was built by order of Queen Doña Mayor in the 11th century, to facilitate the crossing of the river Arga for the pilgrims who were making the Way of Saint James. It has six semicircular arches and gives its name to the Navarrese town where it is located.

The Romanesque bridge La Reina is still considered one of the most beautiful monuments of the Camino de Santiago of the whole Route, being an obligatory stop for all the pilgrims who do the French Way.

In any of the variants of the Way of Saint James we will find dozens of churches, but without a doubt one of the most striking is this one located in a lonely plain only two kilometres from the Navarrese municipality of Muruzábal. The Romanesque chapel of Santa María de Eunate (12th century), surrounded by a halo of enigmas and esoteric mysteries about its origin and purpose, has become one of the legendary temples of the Camino de Santiago. Some theories claim that it was built by the Order of the Temple in the image of the temple of Jerusalem, others point to the order of Saint John of Jerusalem, while popular belief speaks of a founding queen. Be that as it may, the chapel, with its octagonal floor plan and surrounded by a porticoed gallery, is of extraordinary beauty and sobriety. The origin of the name is not so mysterious: “eunate” means “one hundred doors” in Basque.

Some theories claim that it was built by the Order of the Temple in the image of the temple of Jerusalem, others point to the order of St. John of Jerusalem, while popular belief speaks of a founding queen. Be that as it may, the chapel, with its octagonal floor plan and surrounded by a porticoed gallery, is of extraordinary beauty and sobriety. The origin of the name is not so mysterious: “eunate” means “one hundred doors” in Basque.

Its construction was ordered in 1052 by King Don García Sánchez III and his wife, and the origin of its foundation has a good dose of legend. According to it, the monarch was hunting, and after chasing a prey to a cave, he found a figure of the Virgin with a bell, a lamp and a vase of lilies. Some time later, the king built the Monastery of Santa María la Real as an offering for having helped him recover the population of Calahorra.

The present church dates from the early sixteenth century and the cave where, according to legend, the Virgin was located at the foot of the main nave.

Magnificent cathedral (12th century), which protects the crypt and mausoleum of its patron saint, Santo Domingo de la Calzada, a religious who dedicated his long life to the service of pilgrims, building hospitals, bridges, and even a stretch of road that runs between Nájera and Redecilla. The symbolic link of the city and the cathedral with the figure of a hen is curious, whose origin is a miracle attributed to Santo Domingo, according to which he saved the life of a young German pilgrim who was wanted to be hanged for a robbery he had not committed; he proved his innocence before the incredulous corregidor of the town by making a roasted hen jump and sing. Hence the famous saying “Santo Domingo de la Calzada, where the hen sang after the roast”.

Juan de Ortega, born in 1080, is the holy founder of this small village. He became a disciple of Domingo de la Calzada on his return from a pilgrimage to Jerusalem. He collaborates and promotes the construction of hospitals, churches, bridges, etc. The church of San Juan de Ortega, dating from the 12th century, is Romanesque, as is the magnificent mausoleum and tomb of the saint. 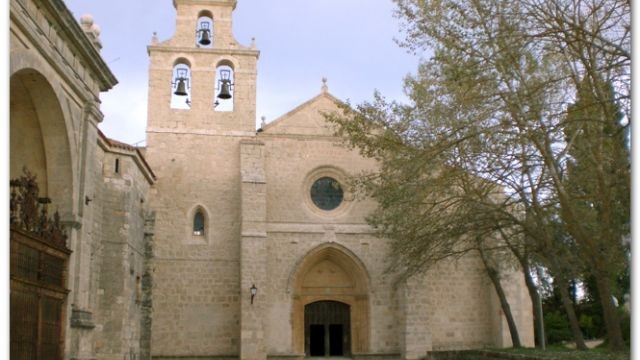 The so-called “Miracle of Light” takes place inside the church: two days a year, during the equinoxes (around 21 March and 23 September), the sun illuminates the capital representing the scene of the Annunciation for ten minutes.

Like so many other 13th century temples, Burgos Cathedral was built under the strictest French Gothic pattern, the dominant artistic trend of the time. Begun in 1221 by order of King Ferdinand III the Saint, it is majestic and one of the most important artistic monuments on the Camino de Santiago. If you ask any pilgrim about the most beautiful monuments on the Camino de Santiago, it is unlikely that the Cathedral of León will not be there. So much so, that it is the first monument declared in Spain by a Royal Order.

With a clear Gothic style, the Cathedral of León was started at the beginning of the 12th century, taking a little less than a century to finish. Inside, the collection of coloured stained glass that can be seen on its walls is, without doubt, one of the largest and most beautiful collections of medieval stained glass in the world.

The beautiful medieval bridge that crosses the river Órbigo, called the Paso Honroso, is the longest in the Jacobean route (310 meters) and one of the most famous, the protagonist of the feat of the knight Don Suero de Quiñones in 1434, who, to prove to his beloved that his love was sincere, challenged in struggle all those who dared to cross it. Built between 1889 and 1915, this neo-Gothic building is, together with Casa Botines (León) and “El Capricho” (Comillas, Cantabria), one of the only three constructions by Antoni Gaudí outside Catalonia. In this period of his career, the brilliant Catalan architect was influenced by the medieval Gothic, but decided to reformulate under his own style, solving certain structural shortcomings suffered by the original style. Thus, he created a work so magnificent that he effortlessly won a place among the most beautiful monuments of the Camino de Santiago.

The current Templar castle of Ponferrada was originally a pre-Roman fort. In the middle of the 12th century, the Order of the Templars decided to create the fortress that we know today. The aim was to establish a strong settlement in Ponferrada that would serve to receive and shelter the pilgrims who made the Way of Saint James.

The current castle is the product of many reforms that have been made over the past six centuries but is undoubtedly one of the beauties of the Route. Because they are unique constructions and can only be seen in this area of Spain. These houses of Celtic origin have a circular or oval floor plan of between ten and twenty metres in diameter and are made of stone walls. They were made with a conical roof so that the snow and water would slide down.

The small town of Samos is born in the shadow of the splendid monastery of San Julián, the monastery of Samos, one of the most important in Galicia. Founded in the 6th century, it has hosted monastic life for fifteen centuries almost without interruption. Today, twelve monks from a Benedictine community live together and continue to offer hospitality to pilgrims as their predecessors did. As for the monumental complex, most of its rooms belong to the 17th and 18th centuries, including the majestic church and the two magnificent cloisters, because a fire destroyed the monastery almost completely in the mid 16th century. There are daily guided tours from the neoclassical church to the Small Cloister or the Nereid Cloister, no corner should be left unattended.

The old city of Portomarín disappeared in 1963, flooded by the waters of the Belesar reservoir, victim of the construction of a hydroelectric power station. The modern city, built in the early 1960s, was fortunately the site of the most historically important buildings: the solid and robust church of St. Nicholas (12th century), built by the Order of Malta.

The small village of Vilar de Donas is located on the side of the Jacobean route in Galicia between the towns of Portomarín and Palas de Rey. When one arrives at the “mosteiro”, one is impressed by its elegance and demeanour in an absolutely rural area where time seems to have stopped. The church was part of a female monastery where the ladies of the Arias de Monterroso family made their profession (hence the nickname “de donas”) and later, in 1184, it was donated to the knights of the Order of Santiago, the guardian and defender of the Jacobean Way in Galicia, who established their priory there. It served as a general burial place for the knights of Santiago who died in Galicia. The building was completed at the beginning of the 13th century, which is when its façade was erected.

We are in front of one of the most beautiful and best preserved castles in the history and geography of Galicia. A sample of the noble and feudal architecture of Galicia that best preserves its traditional architecture. According to documents of the time it is known that Gonzalo Ozores de Ulloa built this fortress in 1378, although what we can see today belongs to the fifteenth century. To enter the fortress you have to cross a small moat by means of a small bridge. The castle is defended by four small towers at the corners that protected the large keep that stands in a corner of the central courtyard.

Such was their dominance in the area that the castle came to have an army of some 3500 men. The fortress even resisted the attack of the Irmandiños, who destroyed most of the Galician castles in the 15th century. Inside the walls there is a small chapel from the 12th century, known as San Pedro, which served as the parish church until not long ago.

And of course this emblematic symbol of the Way, whatever route you choose to get to Santiago, could not be missing from the list. The Cathedral is located in the Obradoiro square and clearly you can’t stop photographing it at the end of your journey. The mass or the Botafumeiro ceremony are some of the rites you can enjoy. And these are the places on the French Way from Roncesvalles that are well worth visiting.